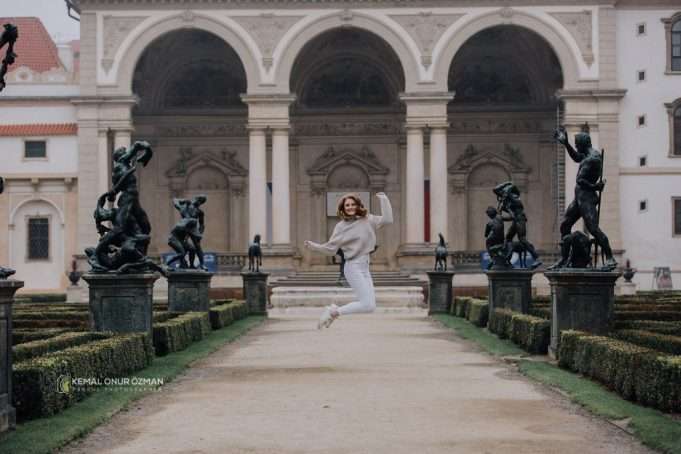 This strictly geometrically designed early Prague Baroque garden. It was created in parallel with the construction of the Wallenstein Palace from 1623 to 1629. At first sight, one’s eyes are drawn to the massive sala pavilion, which at the time of its construction was unprecedented, and an artificial cave with stalactites (grotto).

The construction was carried out with participation of Giovani Pieroni, Andrea Spezza and Nicolo Sebregondi. Sala terrena adjoining the Valdštejn Palace was completed in 1629.

Its walls are decorated with frescoes and stuccoes by Baccio Bianco with themes from the Trojan War. The frescoes were damaged by the later re-painting in 1853 (painter named Friebel).

Sala terrena was reconstructed in the years 1911 – 1912 and again in 1965. In 1859, Shiller’s drama Valdštejn was staged here; in 1938 an exhibition named Prague Baroque was held in the palace and the adjoining premises, and since then, it has been used as a place for theatre plays and concerts. Next to sala terrena, there is an artificial stalactite cave (grotta), made of lime stucco stalactites – roof ridge-tiles were used as the cores of the stalactites.

The right from the cave, there is a wired aviary designed for keeping exotic birds. In front of sala terrena, there is a flower parterre, in the centre of which there is a bronze fountain with a copy of the statue of Venus with Cupid and dolphin by Benedikt Wurzelbauer from 1599. In 1648, the statue was seized as a war booty to Sweden together with other statues, and it was returned to Bohemia in 1890. The original is deposited with the owner. (Prague.eu informations).

Albrecht von Waldstein (known Albrecht Valdštejna, and to the
English as Wallenstein – the name given to him by the German playwright Schiller in
his tragic trilogy) was the most notorious warlord of the Thirty Years’ War. If the
imperial astrologer Johannes Kepler is to be believed, this is all because he was born
at four in the afternoon on September 14, 1583. According to Kepler’s horoscope,
Waldstein was destined to be greedy, deceitful, unloved and unloving. Sure enough,
at an early age he tried to kill a servant, for which he was expelled from his Lutheran
school. Recuperating in Italy, he converted to Catholicism (an astute career move)
and married a wealthy widow who conveniently died shortly after the marriage.
Waldstein used his new fortune to cultivate a friendship with Prince Ferdinand, heir
to the Habsburg Empire, who in turn thought that a rich.

0
Carp fish in the bathtub? Extra plates? No Santa Claus?  Wondering what typical Czech Christmas look like? Keep reading. Christmas is probably the biggest and the...