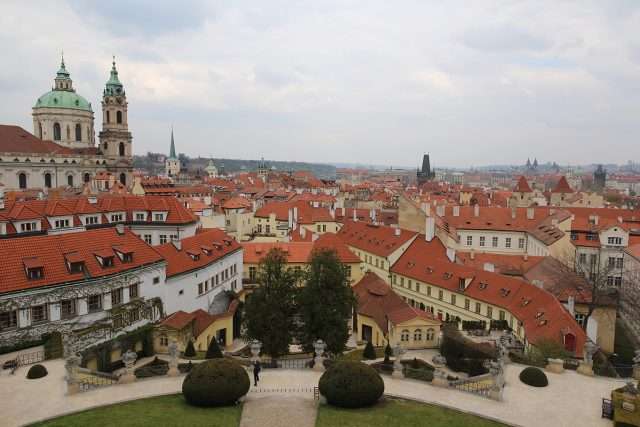 Vrtba Garden or Vrtbovska Garden (Vrtbovka zahrada) is one of the most beautiful and significant Baroque gardens in the central Europe. Still, it might be quite difficult to find it. It’s hidden behind an unnoticable gate. The more you can surprised by the beauty behind it.

How to get there

Get off at the station Malostranska Namesti Tram Stop. The entrance is 25m away from it.

Karmelitská 25, Prague 1 (Near by Malostranska Namesti)

History of the Garden

The garden is part of the Vrtbovský Palace no. 373/III. This city Italian-style palace garden is a gem among baroque gardens in the whole of Central Europe. Established on the site of the former vineyards around 1720 at Vrtbovský Palace. The owner Jan Josef Earl of Vrtba entrusted the building of the garden on Petřín hill slope to the architect František Maxmilián Kaňka. With its area of approximately 3,000 m2 it is one of the smaller historic gardens, nevertheless due to the originality of the architectural design of the irregular space on the slope and due to its artistic and historic value of decorations it is a gem of European importance.

Vrtba family kept the palace till 1799; in 1807 it was referred to the hospital in Karlov. In the years 1886 to 1889, Mikoláš Aleš lived here. The garden gradually decayed and was divided among multiple users.

For 13 years the entry into the garden was forbidden due to state of disrepair (from 1985). From 1993 to 1998 the garden underwent an extensive renovation. Both buildings and the foliage were reconstructed. 15 tapered hornbeams, over 200 hornbeams in the hedges, 18 conical yews, 8 ball-shaped yews and tens of thousands of flowers and shrubs forming ornaments were planted here. The Vrtba garden was opened to the public in June 1998.

Prague Guide - July 5, 2022 1
Sweep your loved one off their feet with these romantic proposal ideas in Prague, from picturesque buildings to unforgettable baroque parks. Get a yes when...