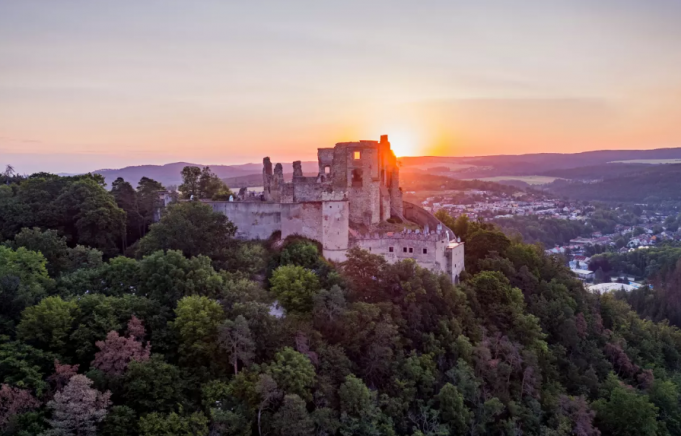 The romantic ruins of the Gothic-Renaissance Boskovice castle stand at a height of 460 meters above sea level at the border between Malá Haná and Drahanská vrchovina. Since 1975, the castle has undergone gradual reconstruction, the result of which is the opening of a large part of the castle ruins.

Boskovice Castle welcomes visitors with a round tower with a Renaissance battlement . The torso of the castle palace has been preserved from the originally massive building, offering an impressive view of the picturesque local landscape . A technical point of interest is the 26-meter-deep well driven by a wooden pedal wheel, the only functional one in the republic . Since 1975, a gradual reconstruction has been underway, the result of which is the opening of a large part of the castle ruins.

From the history of the castle: the history of the castle began to be written in the middle of the 13th century. At that time, it belonged to the family of the lords of Boskovice , who owned the castle and the estate until the end of the 14th century. At the end of the 14th century, the castle passed into the possession of the lords of Kunštát. Construction of a new medieval settlement was apparently started at this time. From the 50s of the 15th century, the castle together with the Boskovic manor was once again held by the lords of Boskovice, until the 16th century, when it was acquired by the Eder family from Štiavnice and later by the Polish Morkovski family from Zástřizl .

At the end of the 17th century, the castle was acquired by the Dietrichsteins . At this time, the decline of the castle occurred, which was replaced by a new residence in the city. The castle definitively loses its function after 1733 and begins to deteriorate . The castle roof was torn down and the masonry dismantled as building material for the manor houses in Boskovice . In 1843, the heiress of the Boskovice estate, Therese of Dietrichstein, married Count Alfonse Mensdorff-Pouilly . In 1856, Therese dies, and her inheritance thus becomes the property of the Mensdorf-Pouilly family, which has owned it until now with a break of more than forty years .

Price for a free tour without a guide.

The surcharge for the guide service is CZK 30 for full and CZK 20 for reduced admission.

Prague Guide - January 17, 2023 0
Czech Republic has a rich and diverse music culture with a long history of classical music, folk music, and popular music. Classical music has a...