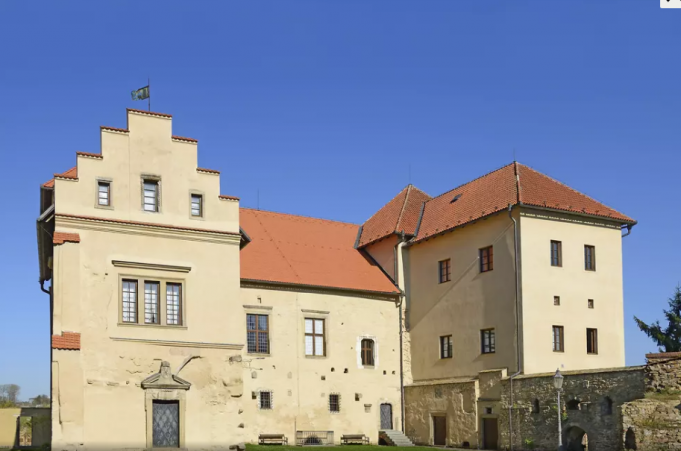 In Polná, a castle and a chateau combine into one unit. Built around 1320 on a promontory above the confluence of the Šlapanka and Ochozské streams. In the core stood a massive cylindrical tower, which is evidenced by the oldest painting of Polná – vedute Georgie Houfnagl from 1617.

The early Gothic castle was built in Polná in the middle of the 13th century by the lords of Polná on a promontory protected in the west, north and east by ponds. The castle was modified in the 14th century, when it belonged to the lords of Lipá and later to the lords of Pirkenštejn. During the reign of the lords of Kunštát in the years 1464 – 1515, a late Gothic reconstruction took place. The building was rebuilt into a Renaissance castle after a fire in 1584. The entire castle area served as officials’ apartments and the seat of the estate’s administration. In 1794, the castle burned down. The Ditrichštejn family were no longer interested in repairing it, the seat of the authorities was moved to the Pribyslav castle, the 3rd floor of the palace was demolished and the rest was only temporarily covered. The torso of the castle was then rented out as apartments and also served as a warehouse. In 1922, the town of Polná acquired the castle.

The preserved castle and chateau parts document the architectural development of the building within individual artistic styles. You can see a part of the Gothic castle tract with a wing modified in the Renaissance, a preserved part of the Gothic fortifications – a park with a bastion, a Baroque part of the castle together with a fountain, dated 1693. In the so-called Art Gallery , late Gothic vaults and remnants of Renaissance frescoes have been preserved. In the castle tract and part of the castle there are museum exhibitions introducing visitors to the history of the castle, the town and the Polen region. There is a “merchant shop” , an exhibition of old crafts, a baroque pharmacy “At the Black Eagle”, a lapidary. More than 140 unique clocks, pocket watches, clock movements and music boxes are displayed in the clock and watchmaking exhibition.

In summer, occasional musical productions are held in the castle courtyard.

Tips for a trip: Polná and surroundings

Flight to Prague from Australia and New Zealand

Prague Guide - June 26, 2019 0
Flight times from Australia and New Zealand to Prague are twenty hours or more, depending on routes and transfer times. There’s a wide variety...