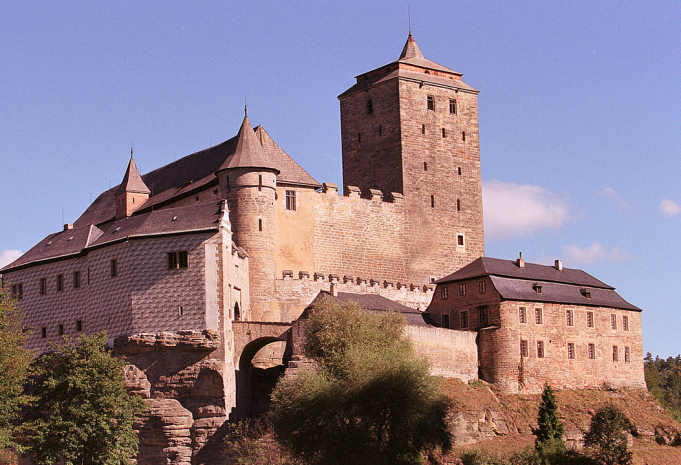 Kost Castle is one of the best-preserved, most important and at the same time the last medieval castles in the Czech Republic. The castle is located about 18 km from the town of Jičín in the protected landscape area Český ráj.

A popular legend says that the castle was named Bone because it was not conquered more than once , as it was as hard as bone. The castle now offers a tour of  4 circuits with the theme of the Kinský family, the medieval torture chamber , a combined circuit (Kinský family and Mučírna) and a shortened circuit. Kost Castle today belongs to the brothers Giovanni and Pio Kinski, just like Karlova Koruna Castle in Chlumec nad Cidlina . They live permanently in Italy and come to their estate in Bohemia once or twice a month. The company Kinský dal Borgo operates in the Czech Republic, which manages all their assets here.

Kost Castle underwent extensive reconstruction between 2019 and 2021 , the largest in modern history. The aim was to stabilize the subsoil under the castle, drain the area and repair the park walls. Several points of interest were discovered during the necessary interventions. A secret passage was found  and, according to archaeological findings, it was found that the castle was built roughly 100 years earlier than historians had previously believed. New for visitors from 2022 is a modern exhibition  set up on the lower floor  of the Great White Tower . This is focused on the construction development of the castle, which its creators will bring closer with the help of animation and a model.

Get to know the fate of the owners of Kost Castle. Explore the castle palaces, the armory with a collection of rifles, pistols and other weapons, meet important members of the Kinsky family. As part of the tour, you will go through all the courtyards, the chapel and the black kitchen.

Go back hundreds of years in the castle torture chamber. See a working guillotine, a witch’s cage or a butcher’s shop and let yourself be drawn into the secrets of Czech criminal law. You will walk through all the castle courtyards, the chapel, the black kitchen and the ground floor of the Great White Tower with a model of the castle and a computer animation of its development.

Make your way through the castle! Go on a tour of Kosti, which includes all the castle courtyards, the torture chamber, the palaces, the salla terenu, the chapel of St. Anne, the black kitchen and the ground floor of the Great White Tower. Consider visiting the circuit with small children – the explanation is detailed and the journey is long.

Don’t have much time, but still can’t just drive around? Try the shortened circuit, which lasts only 40 minutes, but you will definitely not come up short. We will guide you through the castle courtyards, the chapel of St. Anne and the ground floor of the Great White Tower.

From the history of the castle
The origin of the castle dates back to the 14th century , and the construction was probably started by Beneš of Wartenberk, who had a long hall and a tower built as a defensive fortress. After 1370, it was radically rebuilt by Peter of Vanrtenberk. The castle was then owned by the Házmburk, Šelmberk and Biberštejn families , who expanded it and rebuilt it in the Renaissance style.

Under the Lobkovics , around the turn of the third and fourth quarter of the 16th century, the entire southern part of today’s area, including farm buildings with a brewery, was created. Albrecht of Valdštejn was also preparing for a major reconstruction , but he was murdered before the actual execution. The castle lost its residential function in 1590 with the last owner, Oldřich Felix from Lobkovice (1580 – 1590), then there was only the administration of the estate with apartments for officials and other employees. In 1635, the castle burned down. When it was owned by the Černín family , it fell into disrepair and many rooms were used as a granary . The former fortress was then bought by the Netolic family . Anna Marie dal Borgo Netolicka married Norbert Kinski,whose descendants are today’s owners of Kosti.