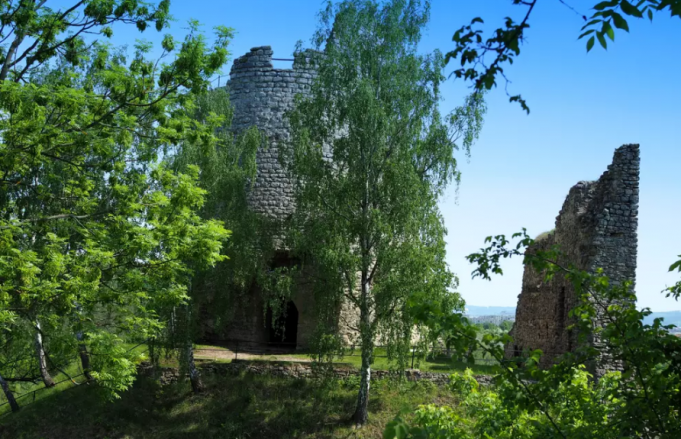 Karel Hynk Mácha’s favorite castle above the romantic Jizera valley, with a beautiful view from the sprawling tower called Putna, which today is visibly tilted thanks to treasure hunters and the construction of the railway below the castle.

Not far from Mladá Boleslav , actually just on the other bank of the Jizera river, lies the ruins of the Gothic castle Michalovice , better known as Michalovice Putna thanks to its dominant tower . The first mention of the castle can be found in the 13th century, when in 1281 Jan from the Markvartic family began to write from Michalovice. The castle was built on a steep promontory above the river, with a separately fortified rampart separated by a deep moat . The castle itself was surrounded by a double wall, and the remains of the castle palace indicate that it was two-story.

The most characteristic element is the defensive cylindrical tower , which survived even the ruthless search for treasure in the 19th century. It was undermined, and on one side it fell down an entire floor. However, its stability was later restored, and it is still open to the public today. The view from it was also appreciated by Karel Hynek Mácha , in whose honor a bronze plaque is placed here. As you walk down the corridor and up the spiral staircase to the lookout, you feel like you’re falling to one side. From above there is an impressive view of the Jizera valley, part of Mladá Boleslav and the Loreta tower in Kosmonosy. It is not known if the old treasure hunters found anything in the castle, but the treasure was indeed there. In 1935, Czech Railways workers, while repairing the tower’s statics, found a pouch with 470 silver coins from the Thirty Years’ War right under it.

7 things to do in Prague at Valentine’s Day?

Prague Guide - January 25, 2021 1
Prague is one of the most romantic city in the world. You can find here 7 best thing to do in Prague at Valentine's...