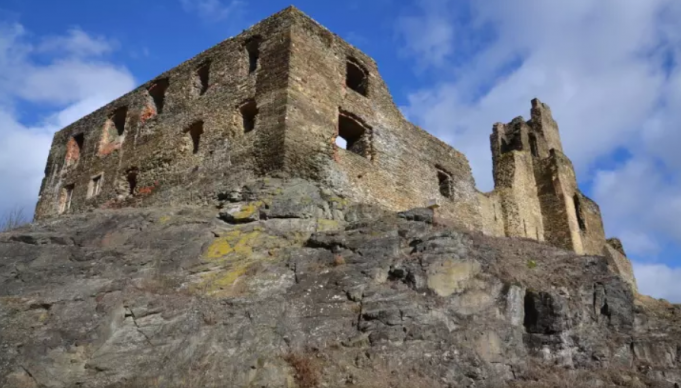 The ruins of the Okoř castle are a popular destination for hikers and cyclists and at the same time one of our most photographed castle ruins. In the summer months, fencing performances or epic battles take place here, and the area in front of the castle becomes the scene of festivals and concerts.

The path from the village of Okoř leads to the castle along the Zákolanské stream. You can walk the sightseeing circuit either with or without a guide . In the castle, you can see the torso of the tower and the ruins of the early Gothic chapel up close .

On the western, northern and southern sides of the fortifications, you can notice the remains of the late Gothic fortifications, which consisted of a semicircular bastion with key embrasures from the 15th century . The slope east of the castle, which hid potential danger from attackers, forced the owner to build a separate forward bastion , from which you can see ramparts and ditches today.

The origins of this castle date back to the 13th century . The castle was rebuilt many times with an emphasis on its better defenses. An important part of its defense was the pond , which surrounded the castle on three sides. Nevertheless, the building was heavily demolished during the Thirty Years’ War . Part of the fortifications, the bastion and the remains of the first gate have been preserved from the lower castle from the end of the 15th century. Parts of the older building, the so-called upper castle , remained better preserved .

Museum of the Infant Jesus of Prague

Prague Guide - April 5, 2020 0
The Museum of the Infant Jesus of Prague presents some of the statue`s historical robes as well as robes from all over the world....