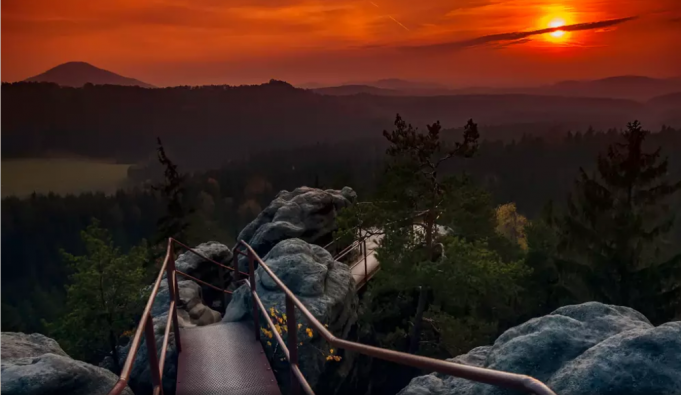 Less than a kilometer north of the village of Vysoká Lípa in České Švýcarsk, you can see a distinctive sandstone block where the Šaunštejn rock castle stood in the past. It offers wonderful views of the picturesque surroundings of Vysoké Lípa, the part of Bohemian Switzerland with the most prominent Růžovský vrch.

The rock castle fulfilled the administrative and protective function of the so-called Czech route , which was an important trade route connecting Bohemia and Saxony. It was also nicknamed the Robber’s Castle , because the place where Šaunštejn was built provided an ideal refuge for the robber raids in the area of ​​the notorious owners of the castle Berks from Dubé . The exact time of the castle’s foundation is not known, but it is most often said to be at the end of the 14th century, when it was supposed to serve to protect the Czech road , representing an important commercial connection of the hinterland with Saxony.

The path to the castle is certainly not easy – access to the remains of Šaunštejn Castle is possible via steep stairsthrough a narrow gap in the rock. In the northern part of the former castle, the lower part of the main tower is excavated into the rock. It is now a small and deep room with a jug-shaped seat, which used to be either a cistern or a prison, or possibly used as a warehouse. A little lower in the side parts of the rock wall, you can see a carved rock cave . The cavity in the rock block used to be a stable or a gatehouse. The peaks of individual rocks are connected by steel bridges.

In 2021, the castle underwent a reconstruction that dealt with the unstable rock blocks above the entrance to the castle torso. The observation decks and access to the castle were also modified. The castle is open again from summer 2022.