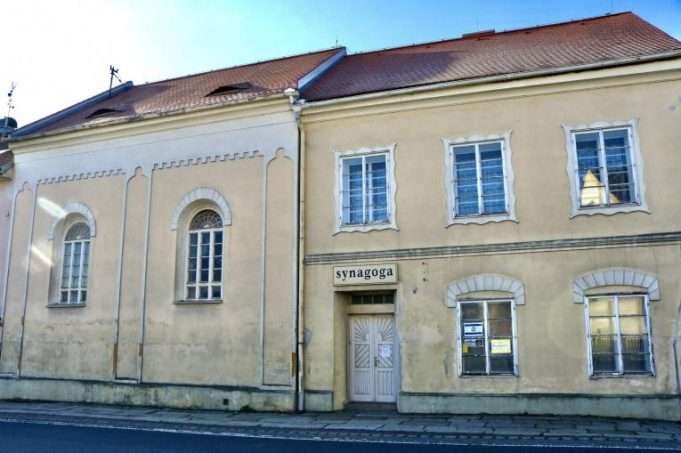 The synagogue was opened on January 21, 1863. It was built at the expense of the Kdynia Jewish community in the neo-Romanesque style. It served for Jewish religious life until 1936. During World War II, it served as a warehouse for the German army. During the period of socialism, it became the Husice church and since the 1990s it has been owned by the town of Kdyne. The exhibition provides an overview of the history of Kdynia’s Jewish population. The main hall, including the tabernacle, the women’s gallery and the original pew, has been preserved. A major attraction is the restored mikveh. Today it is used for cultural purposes.

The necessary funds for its construction were collected among themselves by the members of the Jewish religious community of Kdynia. It was dedicated on January 21, 1863, but from 1929 services were held only on holidays, the last time in 1936. From 1871, there was a commemorative plaque inside with the names of the main builders, such as Isak Augstein, Eliáš Klaubr or Jakub Hutter .

During the First World War, refugees were accommodated here.

The synagogue survived the Second World War quite unscathed, apparently as a warehouse. After the war, it became the property of the Czechoslovak Hussite Church. In the early 1960s, as a prayer hall of the Hussite Church, it was proposed to be declared a cultural monument, but it did not materialize. In the 1990s, it underwent a partial repair and in 1997 it was declared a cultural monument.

The synagogue building currently houses a small museum documenting the history of the city of Kdynia and the Kdynia Jewish community . There is a largely untouched prayer space with a painting, a box for keeping the torah ( aron ) and decorations from the years when the building was built. It also includes the Information Center of the city of Kdyne.

Tomb of the Stiassni family