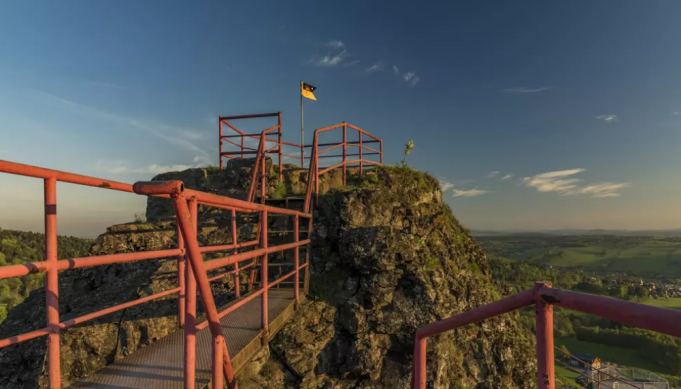 Today, Tolštejn is the ruins of a medieval castle in the Lužické hory near Jiřetín pod Jedlovou, which was first mentioned in 1337. Every year, the Tolštejn festival is held directly in the castle and in the sub-castle, which marks the beginning of the tourist season in the region.

The castle was built to protect the road from Bohemia to Lusatia and was an important and powerful fortification in its time. The first owners were the Vartenberk family, approximately until 1402, when the castle became the property of the lords of Dubá, who thus included the entire Tolštejn estate among their vast holdings in northern Bohemia. In 1481, the estate and the castle were acquired by the Šlejnics from Saxony (Jiří Šlejnic founded today’s Jiřetín pod Jedlovou in 1548 ).

After 1587, several owners took turns in possession of the castle, until during the Thirty Years’ War in 1642, the castle was besieged and burned by Swedish troops with fire missiles. The completely burnt down castle was never rebuilt.

In 1865, a Swiss-style castle restaurant was built here , which was run by the Münzberg family for three generations. The restaurant itself was reconstructed and opened in the fall of 2002. Since 1996, thanks to the initiative of the Jiřetín town hall, interest in saving the castle ruins has been renewed, with the fact that it has already largely been possible to stop the devastation and even build some of the walls.

Tolštejn Castle was built on a steep rocky hill with a pair of dissected bell towers. From the original mining castle, which stood at the northern foot of the summit rocks, only tiny remains of the masonry above the former restaurant have been preserved. Remains of the walls belong to the oldest part of the Gothic castleon the western edge between the northern tower and the summit rocks, which were connected by a wall and footbridge and served as a lookout. In places, the steps of the staircase (the so-called riding stairs) leading from the former restaurant to the southeast are still visible . From the top, accessible via an iron staircase, there is a nice view of the surroundings of the Lužické mountains and the valley of Jiřetín , Horní and Dolní Podluží and Varnsdorf , behind which the Šluknovské pahorkatiny and Lužice hills are on the horizon .

Švihov Water Castle – a gem worth seeing up close