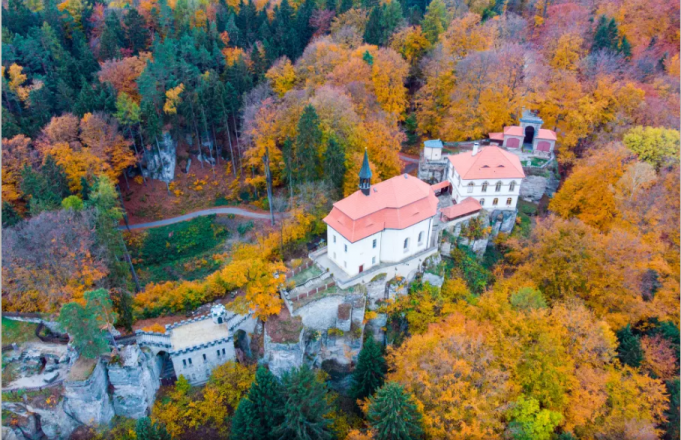 The complex castle complex of Valdštejna Castle was built on jagged rocks for centuries. Gothic masonry, rock vaults, buildings and works of art from the Baroque era, classicism and romantic modifications combine the Middle Ages with the 19th century.

Many surprises await you at Valdštejná Castle. During the summer holidays, you can be accompanied by a local robber knight, you can also take part in a mysterious night tour , experience the night of the bat or meet Duke Albrecht of Wallenstein himself. All-day fencing performances , programs for children, concerts, theater performances and many other events await you .

The tour without a guide includes all exteriors of the castle, a visit to the cellars, the chapel of St. Jan Nepomucký and billiard hall. ATallows visitors to devote themselves to the castle according to their interests, they can sit anywhere, stay in the castle for as long as they want. For those interested in a guided tour, there is an engaging interpretation of history, a visit to the ceremonial hall in the classicist house and the rooms in the romantic palace . Interpretation for children is always adapted to their age.

They pay particular attention to disabled visitors who cannot complete the entire sightseeing circuit. The cellar under the first courtyard now houses the castle’s archeology and in the deep rock-hewn cellar there is a geological section with the exhibition “Praise of Sandstone” , dedicated to this phenomenon of the Bohemian Paradise . The exhibition of models of monuments in the billiard hall is also of great interest.

Already at the entrance bridge, the gallery of baroque statues of Czech patrons will captivate visitors. In the first courtyard, we take a look at a small chapel with a painting, the alleged likeness of Karel Hynk Mácha. A surprise is the beautiful Ballroom and lounge of the classicist house with a portrait gallery of the last owners of the Lex family from Aehrenthal. The famine is also interesting. You can also see the chapel of St. Jan Nepomucký , which has been the new dominant feature of the castle since the 18th century. The connecting staircase and terrace, which are among the best manifestations of early romanticism, will lead you to the oldest part of the castle. But before that, go down to the biliary hall.

Rock cellars are also accessibleon the third rock block, which was part of the defense system of the so-called “murder gorge”. The rear castle complex creates an interesting labyrinth. During renovations in the 19th century, a lookout for Trosky and Skalní město was built at the end of the castle. Visitors will also be interested in a tour of the romantic palace, the essential part of which is the ancient medieval palace of the lords of Valdštejn.

History of the castle

Valdštejn is the oldest castle in the Bohemian Paradise , it was founded around 1260 by Jaroslav of Hruštice from the Markvartic family, ancestors of the lords of Valdštejn. The Valdštejn family held the castle until about 1380, and the other owners, the lords from Vartenberk , until the beginning of the Hussite wars. The occupation of the castle by Hussites, marauding knights and the frequent change of owners in the 15th century, was the reason that the originally guarded castle was divided into two castles. At the end of the 15th century, the castle was abandoned by its owners. The burnt and destroyed castle was once again raised to new glory by the Valdštejn family , to whom it belonged for the next 200 years. In the 18th century, they built an unusual place of pilgrimage here with a unique atmosphere in the environment of the old ruins of the ancestral seat, the surrounding forests and rocks. The new owners continued this effortThe Leks of Aehrenthal in the first half of the 19th century. They connected the landscape with a network of tourist routes, built viewpoints, the Sedmihorky spa . After 1824, Valdštejn Castle was made available as an interesting tourist destination as the second monument in Bohemia .

Surroundings of the castle

Valdštejn is the gateway to the nearby rock town. It is located in  the Český ráj protected area, in the  European geopark , on the edge of the Hruboskalsko nature reserve . The entire area is criss-crossed by a network of hiking trails and bike paths. Well-known are the viewpoints to Skalní město on the ” Golden Path “, the Kopic farm with a gallery of folk sculptures, the forest arboretum. There is an educational trail near the castle. Above all, the whole area is a beautiful forest complex, in which there are four hundred sandstone rock towers . A visit to Valdštejna Castle with a walk in the nearby area is a tip for a wonderful trip.

praguelife - November 26, 2022 0
The synagogue was opened on January 21, 1863. It was built at the expense of the Kdynia Jewish community in the neo-Romanesque style. It...