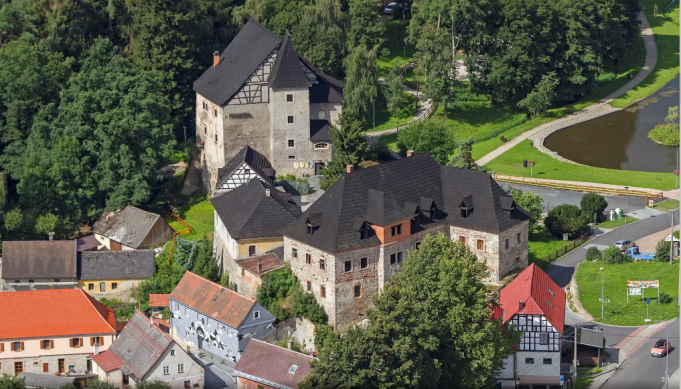 The Romanesque castle of Vildštejn was founded in 1166, but it was only in 2001 that it was made available to the public for the first time. It is one of the oldest castles in Chebsko. Today, it offers visitors a rich program.

Vildštejn Castle (Skalná) stands on a granite rock above the tributary of the Vonšovský stream . It used to be separated from the town of Skalná by a moat, now filled in. The first written report about Vildštejn is from 1224 .

The original Romanesque castle included only the northern part of today’s three-story castle (i.e. less than half of the area), while the rest of this building was built only in the 15th century, when the castle came into the hands of the Cheb patriciate. The preserved Romanesque castle was inhabited until the 19th century , when it was turned into a malt house.

The castle building is completely reconstructed today. It has a castle museum , a medieval banquet hall, a royal hall , a ceremonial hall and a museum of firefighting equipment . Today, the castle’s newer building offers a tour of the medieval forge , the prison and the prison museum in Vildštejn. In the cellar, there is an archaeological exhibition about the history of the castle with the remains of the White Lady walled up alive .

The castle also has a tavern , known for its rich cuisine with a knightly menu. Knight feasts with a historical program are held here . A small spectacle of domestic and wild animals is prepared for children’s visitors. Church and civil weddings take place in the castle chapel in a historical spirit, which have their own unforgettable atmosphere.

In the castle you will find,

-a museum with the real remains of the white lady

-lodging for the traveling prison and the gallows

-the royal hall, which is used to host banquets, conferences and seminars

-a medieval banqueting hall in a historical style – guests can feast here, as the castle has its rich kitchen with a knightly menu.

Red pandas at the Prague Zoo

Prague Guide - July 7, 2022 0
Visitors to the Prague Zoo can watch the newly joined pair of red pandas get to know each other these days. The two-year-old male...