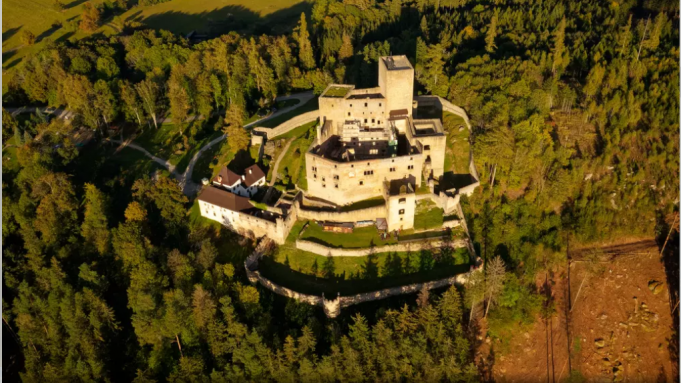 When visiting the grounds of today’s ruins of Landštejn Castle, you can admire examples of early castle architecture, which are among the most remarkable in the Czech lands. You can also climb to the observation tower, from where you can enjoy a wonderful view of the surrounding area.

The castle was built at the beginning of the 13th century , apparently by the Moravian Przemysl family , as a stronghold of the territory on the triple border of Bohemia, Moravia and Austria. With its concept of two towers connected by a palace, it represents a unique complex of its kind in Bohemia and is one of three preserved Romanesque castles in the Czech Republic and one of the most important Romanesque monuments in Central Europe.

The exhibition presents the history of the castle, local archaeological finds and medieval weapons . German poet Friedrich von Schiller once liked the massive walls of the castle, who set the story of his robbers in the surrounding forests. During the main summer season, the Landštejn festival takes place here.

In recent years, rescue archaeological research was carried out in the castle moat , which brought a lot of knowledge about the castle’s past in the form of a lot of material finds and in the form of the discovery of previously unknown construction phases of the building. After entering the castle area, it is possible to visit a small exhibition of these archaeological findings in the first gate. A large number of coins from different periods and from all corners of Europe prove the lively contacts of the castle’s owners with the world. A new exhibition of archaeological findings is also currently being prepared. At the time when the castle was in the possession of the Landštejn family , it primarily served a defensive and military function, which results in an austere purely purpose-built architecture. The core of the castle was a large prismatic tower (the so-called bergfrit) on the south side, and a smaller residential tower with a chapel on the north side .

The upper part of the higher tower of the castle was modified as a lookout point . From its top there is a beautiful view of the forested landscape of Czech Canada . 1 km from the castle there is a Romanesque church in Pomezí with partially uncovered Romanesque paintings .

A restoration survey confirmed that most of the historical plasterwork in the Romanesque chapel of Landštejna Castle is originally Romanesque . Between 2021 and 2017, a thorough reconstruction was carried out, which continues in 2022. Since the walls are very salty and the crystallizing salt falls off with the plaster, it was necessary to stabilize the climate, especially humidity and temperature, to prevent crystallization. When moving around the castle grounds, one must take into account partial restrictions on movement . After plaster conservation, partial desalination and other measures to permanently stabilize the climate, the chapel will be open to visitors again .

0
This fantastic bakery sells some of the best bread in the city, along with pastries, cakes and takeaway sandwiches. They also good coffess with...