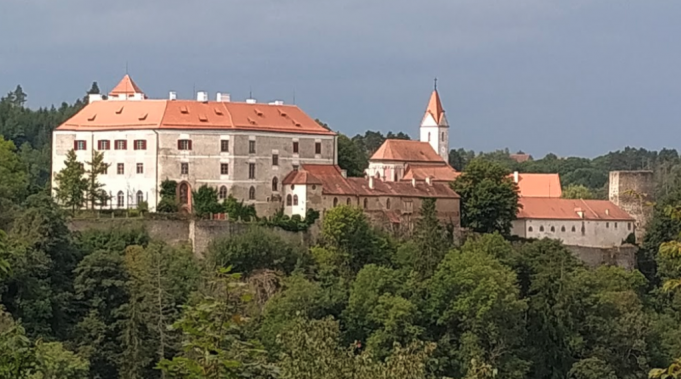 Bítov Castle is one of the oldest and most romantic castles in the Czech Republic. The first written mention of the castle dates from the beginning of the 11th century. The castle is located in the picturesque canyon of the so-called Moravian Switzerland near the Vranovská dam, built in 1935.

The original wooden castle (built on the site of a former settlement) was replaced by a stone castle. From the beginning of the 13th century, the western edge tower has been preserved. Bítov, which used to be the center of one of the six Moravian regions, fell into the hands of the Lichtemburk family for more than two hundred years after the Przemysl family died out . Behind them, the core of today’s castle chapel of the Assumption of the Virgin Mary (1334) was created, and in the foundation of today’s castle palace, the two entrance towers, the gable wall and the south wing. At the turn of the Renaissance and Baroque, Bítov Castle got its present horizontal appearance with a single vertical slender watchtower . Between 1811 and 1863, the abandoned castle belonged to Count František and his son Jindřich of Daunfinally adapted to today’s predominant Neo-Gothic form.

The individual circuits include the palace interiors, the armory, the castle prison, the famine chamber, the torture chamber, the castle chapel . The palace interiors, which are the main circuit, attract attention with the extensive Neo-Gothic illusion painting of the individual halls and lounges on the first floor. The rooms are equipped with stylish, historical furniture , reflecting individual periods of style. The walls are complemented by a collection of paintings of the so-called second wave of German and Austrian romantics Schnorr from Carolsfeld, Karl Russ, Fendi, Wilhelm von Camphausen. On the ground floor of Sally Terena , you will see an atypical collection of lighting fixtures made of colored sheet metal.

It is located on the second flooran extensive zoological collection of domestic and foreign animals , founded by brothers Vladimír and Otakar from Daun, who traveled a large part of the world. The last private owner of the castle (until 1945), the large-scale industrialist Baron Jiří Haas from Hasenfels , was also a great lover of animals, and in addition to establishing a private zoo (one of the largest on the continent at the time) at the castle, he also expanded the collection of the two brothers, especially with the largest a collection of stuffed dogs in the world , including 50 dogs of various breeds.

You can also take a look at the castle manor kitchen , which has been operating since the 18th century in the northern wing of the castle.

Forests of the Czech Republic expertly care for 140 important trees in the historic linden alley , and in the adjacent forest park , 125 seedlings of forest trees are also newly planted, which improve the landscape composition of this area.

The palace (basic circuit)
The palace interiors will catch your eye with the extensive Neo-Gothic illusion painting of the individual halls and lounges. In the interiors, we present the life of the Counts of Daun and the family of the last owner, Baron Haas . The unrecognizable painting imitates wood, stone or stucco wall coverings. The rooms are equipped with stylish, historical furniture, reflecting individual periods of style. On the second floor, there is an extensive zoological collection of domestic and foreign animals and trophies , founded by the brothers Vladimír and Otakar from Daun.

Entrance to the castle (self-guided tour)
In May, June and September – Entrance to the castle (self-guided tour) includes a tour of the castle brewery exhibition with a malt house, lager cellars, a cooper’s workshop, a mashing room, a forest, a threshing floor and a period pub. Next, a tour of the courtyard, the Neo-Gothic chapel with the oldest movable monument, the Bítovská Madonna /from 1334/, the castle gardens of Baron Jiří Haas with panels about the history of the Haas family, panels with castle legends and aviaries with exotic birds . You will also see two exhibition halls with an exhibition of paintings and paper toys. In the months of April and October, entry to this circuit is free, only the courtyard, the chapel and the garden with animals are accessible. In May, June and September, you can visit IV without a guide for the price of this circuit. Hladomorna circuit, torture chamber, prison.

Armory
armory is located in the original premises from the 18th century. The core of the collection is weaponscollected especially during the period when the castle belonged to the Jankovský family from Vlašimi (1612-1752). In addition to the older works of prominent gunsmiths from the end of the 16th century, the collection mainly presents excellent works of art and craftsmanship by gunsmiths of the 17th century (repeating weapons, breechblocks, air rifles, air rifles). The armory also contains a selection of medieval weapons (spears (11th century), swords (15th century), fortification rifles). The core of the oriental part is mainly objects from the Islamic area.

Hladomorna, torture chamber, prison
Hladomorna with torture chamber can be found in the oldest surviving stone building of the Britove Věž castle from the first half of the 13th century. On the ground floor there is a starvation chamber, supplemented by two prison dungeons on the first floor. It is located on the second floora torture chamber with replicas of torture instruments and a presentation of tort law. Visitors can touch and try everything. In July and August, the circuit is only accessible with a guide. In the months of May, June and September, the circuit can be accessed independently without a guide at the price of II. circuit Entrance to the castle.

Note:
The last tour always starts 1 hour before the end of opening hours.

Entrance fee to the

Prague Guide - November 16, 2020 0
An extensive and rugged park on the hill between Vítkov and the Olšany cemeterie. There is an amazing view point at the top, with a...

Kinsky Garden near by Petrin Hill

Tolštejn Castle – the best preserved ruin in the Lusatian Mountains