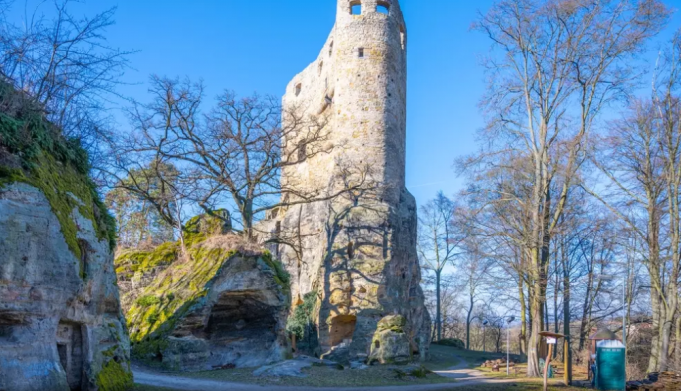 In the northwestern part of the Bohemian Paradise above the village of Boseň lies Valečov Castle, which was built at the beginning of the 14th century on a sandstone rock as a rock castle. The spaces carved out of the rocks were then supplemented with wooden structures, similar to what happened in the nearby Drábské svetničky.

The grounds of the castle in Bohemian Paradise consist of a forecourt (a prison with a famine chamber), a brick palace , rock chambers , corridors and a lookout point. The most interesting part of the exhibition are the small rooms carved in the rock blocks under the castle , used until 1900. The exact time of the castle’s foundation is unknown. The first written report about the owners comes from the years 1316-1318, from the time of the skirmishes of the local minor nobility with Vok of Roštejn – one of the branches of the Valdštejn family . At that time, the castle was probably only wooden and partially carved into the rock.

The castle was maintained until the Thirty Years’ War , after which the castle fell into disrepair and served as a dwelling for the poor and a source of cheap building material.The last residents of the rock flats in Valečov had to move out based on the order of the District Governor’s Office in Mnichov Hradišt dated October 5, 1892 .

Part of the castle exhibition of archaeological findings from the collections of the District Museum in Mladá Boleslav is a new set of tiles from the stoves of the under-chamber of the royal cities of Vaňka z Valečov from the second half of the 15th century. The fairy tale, The Rain Fairy , Lotrando and Zubejda or the films The Treasure of Count Chamaré and The Famous Bandit Historians were filmed in Valečov. Behind the castle you can still see the shelter that was the main character’s residence in the movie.

Note:
Daily entrance fee. Night tours of the castle are also available upon request, CZK 60/30. Entrance to the cellars CZK 20.